With few privately held operators remaining in Western Europe, Spain has provided a boost to the presence of private operators of scale in the region with recent M&A activity. After years of focusing on its mobile expansion, MásMóvil Ibercom SA has turned its eye to fixed line assets, acquiring private Portuguese cable operator Nowo Communications SA in 2020, and announcing the takeover of Spanish cable operator Euskaltel SA in March 2021 for €2.0 billion, turning another operator private. Masmovil, the fourth largest operator in the market, itself became private in November 2020 when it was acquired by Equity Partners, Cinven Ltd. and KKR & Co. Inc. for €2.7 billion. Euskaltel has long been a speculated target for other operators due to its dominance in the Basque region, its recent national expansion and its status as the only major provider in Spain operating as an MVNO. 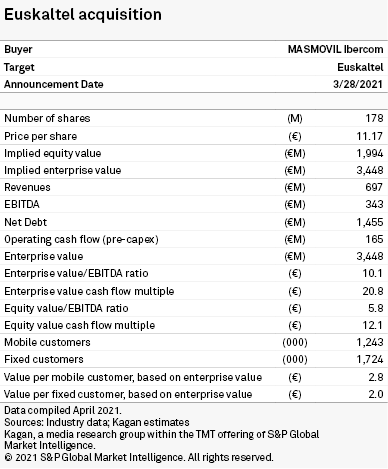 Masmovil’s offer values Euskaltel at an equity value of €2.0 billion, buying at €11.17 per share. Euskaltel, a historically a regional player operating only in the Basque region, expanded nationally just last year after signing a wholesale agreement with Orange allowing it to utilize Orange’s mobile and fixed networks. Euskatel launched a new brand, Virgin Telco, which enabled it to expand its services to 85% of the country and target 18.4 million homes with this deal. Another competitor with a national presence, however, was set to put additional pressure on an already crowded market. 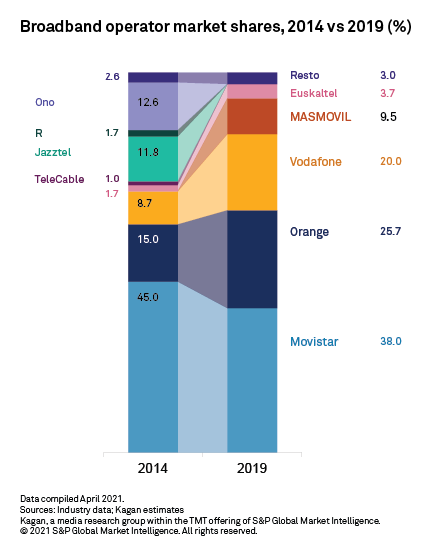 Within Western Europe, Spain, Sweden, Italy and the U.K. are the only countries with five fixed line players. Intense competition and low profit margins already pushed Spain through a round of consolidation in 2014 and 2015, reducing fixed broadband operators from nine to five, with Vodafone España SAU acquiring Grupo Corporativo ONO SA, Orange Spain Ltd. acquiring Jazztel Telecom and Euskaltel acquiring R Cable and later Telecable in 2017.

The market is dominated by incumbent Telefónica SA, which controls 38.0% of the fixed broadband market and 32.2% of the mobile subscribers. Orange and Vodafone rank second and third, respectively, with over 20% market share each in both fixed and mobile, leaving both Euskaltel and Masmovil as the alternative providers. 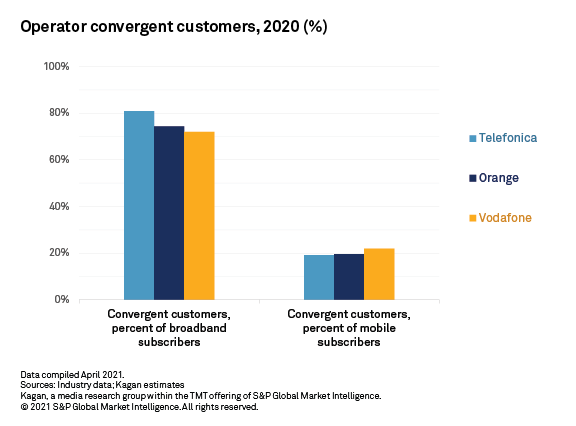 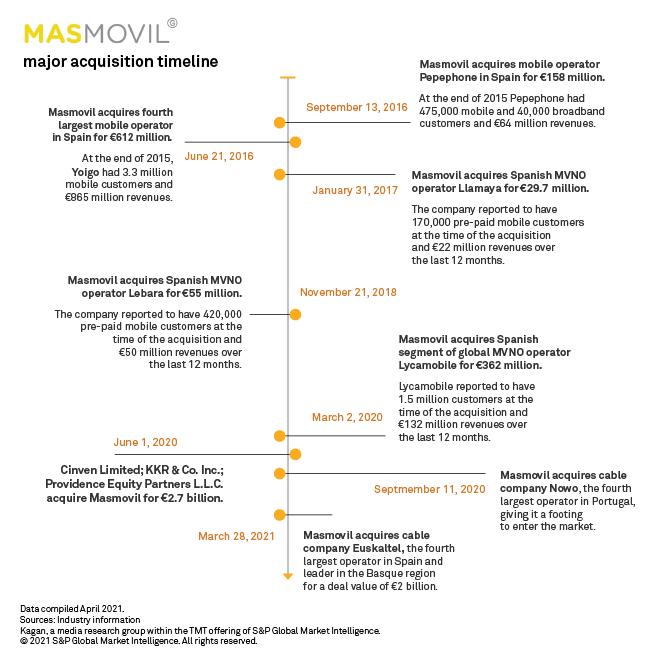 Masmovil has spent the past five years making a series of acquisitions mostly in the mobile sector, starting with Yoigo in 2016 and moving to Spanish MVNOs. Through these, Masmovil has become the fourth-largest operator in Spain. The company never entered the TV market but did build its own broadband network, reaching 13.8 million homes by the second half of 2020, 91% of which are fiber. With the integration of Euskaltel, the operators will decrease the gap between them and the top three, having combined 2.5 million broadband subscribers and 10.7 million mobile subscribers.